The Trials Of Cato

One of the real discoveries on the folk circuit in recent times Mark Radcliffe, BBC Radio 2
Fascinating stuff Cerys Matthews, BBC 6 Music
Swaggering... glossy results The Guardian
One of the most impressive debut folk albums of the year *** Songlines
The Trials of Cato are about to hit the earth's atmosphere with a bang, so sit back and enjoy the
fireworks FRUK


The remarkable rise of double-folk award nominees The Trials of Cato on the UK folk-scene has been the subject of massive critical attention. Dubbed "The Sex Pistols of folk, (J Davis) they pay clear homage to the tradition whilst twisting old bones into something febrile and modern, with stomping tunes and captivating stories.


Originally from North Wales and Yorkshire, The Trials of Cato formed whilst living in Beirut, and spent a year boiling down the roots of their sound into a hybrid of traditional influences that intrigued Lebanese audiences in the country's biggest venues. Returning home from Beirut in the winter of 2016, they have since torn a shape very much their own into the canvas of the UK folk scene.

Back in the UK, they set to performing tirelessly up and down the country, leading to BBC Radio 2's Mark Radcliffe hailing them as one of the real discoveries on the folk circuit in recent times.
Musical development in the run up to their debut album proper was swift and sure, with Hide and Hair winning acclaim and receiving repeated national airplay on BBC Radio 2 and BBC 6 Music.

The Trials of Cato's rapid ascent shows no signs of abating with the band recently nominated for the Horizon Award and Best Album Award in the BBC Radio 2 Folk Awards. Praised for the diversity of their material and influences, The Trials of Cato live show invariably stuns audiences wherever they play. (FATEA) Whether plying their trade busking, performing in front of thousands at festivals across Europe, or frequently selling out their own shows, The Trials of Cato have the wind behind them.

Anna MacDonald is a singer and songwriter of folk songs that show her celtic roots. A multi-instrumentalist she is able to play the piano, guitar and clarsach which she beautifully intertwines with both English and Gaelic songs. 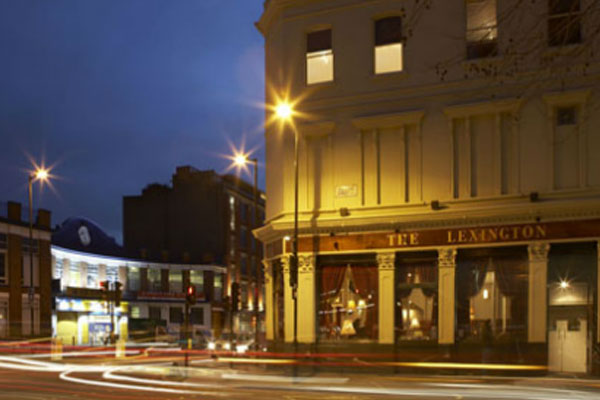 The Lexington is a classic London boozer turned lounge bar, with a hint of Kentucky charm and lashings of rock & roll excess. Enjoy award winning food served up with our favourite American craft beers or just lounge around in our baroque mezzanine exploring the best bourbon selection in London. If you like it a little bit louder, head upstairs for the latest and greatest bands in our live venue. Then dance the night away with our family of music loving DJs, playing everything from 20s jazz to the newest indie through the sea of counter-cultural sounds into the wee small hours.

The Lexington is an early Victorian building and as such is not easily accessible for anyone with limited mobility. While the main bar is on the ground floor and accessible without steps the music venue is up a flight of stairs. We’re happy to help with access where possible.