Since it's inception in 1989 Airforce enjoyed much local success with Chop Pitman on guitar, Doug Sampson ex-drummer of Iron Maiden, Sam 'Tomcat' Sampson on vocals (formerly of Sam Apple Pie) and Tony Hatton on bass guitar. This original classic rock band from London names various artists as it's chief influencers, such as Black Sabbath, Van Halen and Judas Priest, amongst others.

Rolf Promel took over from Sam Sampson on vocals and was responsible for a lot of writing for the band and he was also the vocalist in a live recording. Chop is quoted as saying, “Why Has It Come To This, Fine Line and Melody In Me stick out as examples of his contribution to the band . . . He (Rolf) joined before Keith Haggis and was a big part of Airforce ... great song writer”. Keith Haggis was added to the line-up as a second lead guitarist. In 1999 Mick Dietz took over from Doug Sampson on drums until 2001 when the guys disbanded.

Airforce was reborn when Chop took to the stage once again after being introduced to a bass guitarist in 2008 who, due to work commitments, had been out of the music scene for a while. The ideal mix was found in 2009 after various drummers and vocalists were considered, finally settling on Dee Dyaz for vocals and Ian Jacklin on drums. Ian was a session drummer for many well known bands, and had even had chart success in the early '80s. Dee, sadly, had to be replaced after family commitments became a priority. Sebastian Bolocan took over for a while and then Freddy Ball.

They may have had a stuttering re-start but this true addition to British Rock Music now works extremely well together and perform some real rocking tracks. They are writing new songs as well as revamping old material to a higher production standard. ALL members of Airforce play a variety of instruments and contribute to new material, musically as well as lyrically. And as a result their melodies are instantly memorable and bass lines are punchy and driven. Sticking to the the very core of their early influences, Airforce FLY THE FLAG for the London Rock scene. 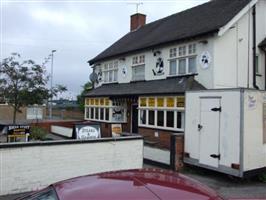 People that don't really know us may consider a bikers pub to be the last place on earth they would want to visit, or do business with, but bikers and visitors to The Vic come from all walks of life, from Surgeons to Lawyers, Actors to Nurses, we are a close-knit community but always welcome strangers that are interested enough in finding out a little more about the scene.