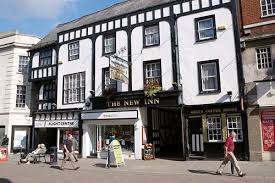 The New Inn is currently closed for a short period following a fire, we are busy restoring the damaged sections of the hotel.

Located in the heart of Gloucester, this 15 century Inn enjoys a medieval courtyard, real ale pub and traditional restaurant with period features. Beautifully restored, the New Inn hotel offers cosy rooms, many with exposed beams and original features. All rooms are ensuite, and have tea & coffee-making facilities and a TV. Free Wi-Fi is available at The Inn.

The courtyard has galleries on all sides, and the historic building was used by pilgrims visiting the tomb of King Edward II in the Abbey, now Gloucester Cathedral – just a couple of minutes’ walk away from the hotel. For the retail-inclined, Eastgate and King’s Walk shopping centres are minutes away, and the train station is five minutes by foot.

The Grill Restaurant serves a lunch and dinner menu in charming surroundings. The New Inn has three bars, including The Tap & Barrel Bar, offering up to seven cask ales. Treat yourself to a tasty homemade cake and a speciality tea in our welcoming coffee shop.

The Old Tap & Barrel Bar
At the New Inn, we’ve always strived to serve the very best real ales, cider and perry from various national and local brewers in a 15-century building that retains its atmosphere of old. The Old Tap & Barrel has a tempting range of lagers, wines and spirits from around the world.

We generally have live music on Friday evenings, and karaoke/disco on Saturdays until Midnight.

Grey’s Coffee House
We offer rich and satisfying Lavazza coffee as well as teas, soft drinks, beer, wine and a range of indulgent cakes and pastries.