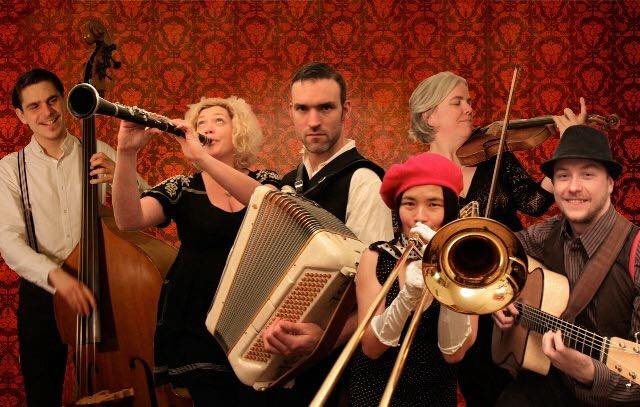 "Sergio Provolone" - Violinist and wearer of Trilbys... AKA Ryan Evans or "Countess Eloise De Comte ", or may also be known during the light hours as Seona Pritchard, our violinist from the prestigious Northern Conservatoire

Bassist Louis Parmagiano or otherwise known as Alex Pearson descendent of Alexander the Great with an arco style to match.

A twist of fate brought the founder members of Fromage en Feu together. On a ferry from France to England, clarinetist Bobby Cheddar was playing a Jewish melody when Jan van der Gouda picked up his trumpet and began to play along.

Ideas bubbled, plans were hatched, Jan dropped the trumpet in favour of the accordion and in Spring 2005 "The Pavement Ravers" burst onto the Bristol street music scene. That summer they were joined by trombonist Babybel, violinist Agent Moulding-Process and singer Violaine Boursin and together they plied their trade around the markets and harbourside streets of Bristol.

Taking inspiration from French cafe singers of years gone by, Violaine conjured up the name "Fromage en Feu" and a new band identity was born. The band briefly had a string section when they were joined by violinist Monterey Jack, but in Autumn 2005 they discovered Sergio Provolone playing for pennies in a disused church in east Bristol. Impressed by his reckless abandon and untamed violin playing, they took him on.

The winter of 2005 saw many changes, with the mighty presence of Czech bassman Pepa Syrecek grounding the band's wild melodies and crazy singing, Bobby Cheddar moving on to join a group of hags with bags and Violaine Boursin leaving for Nepal to join a missionary. Many changes, but in the spring of 2006, with the addition of la belle Babs Wensleydale on the clarinet, Fromage en Feu re-emerged as Bristol's premier faux French cheese-loving band; performing a globe-spanning array of music from Argentina to the Russian steppes at festivals, weddings, parties and many venues around Bristol.

Over the next few years, the sound developed with Senor Tiscamanita on the guitar providing a backbeat and, as his other musical commitments grew too many, being replaced by Welsh guitar maestro Jimi Saval.

The first Fromage album, Debut, was painstakingly crafted over a year and was released in Summer 2009 to great acclaim and the wearing of many false mustaches.

Shortly afterward, Pepa departed the band, leaving a huge double-bass shaped hole that was first filled by Louis Cashel-Blue and Eddie Corleggi in a rare double double-bass act. Exit Louis stage left in a puff of smoke and greasepaint and enter the untapped talent of Vladimir Roquefort, introduced to the band by Eddie, who had pressing engagements with a circus of his own.

Vladimir brought with him a honey sweet singing voice and long-forgotten Polish tunes from the beanfields and moved the Fromage sound to a new level.

From simple tunes played on street corners by a two-man busking outfit to epic Eastern odysseys and finely crafted waltzes played by an unstoppable six-piece Trans-Balkan express, Fromage en Feu has come a long way, but the story is only just beginning... 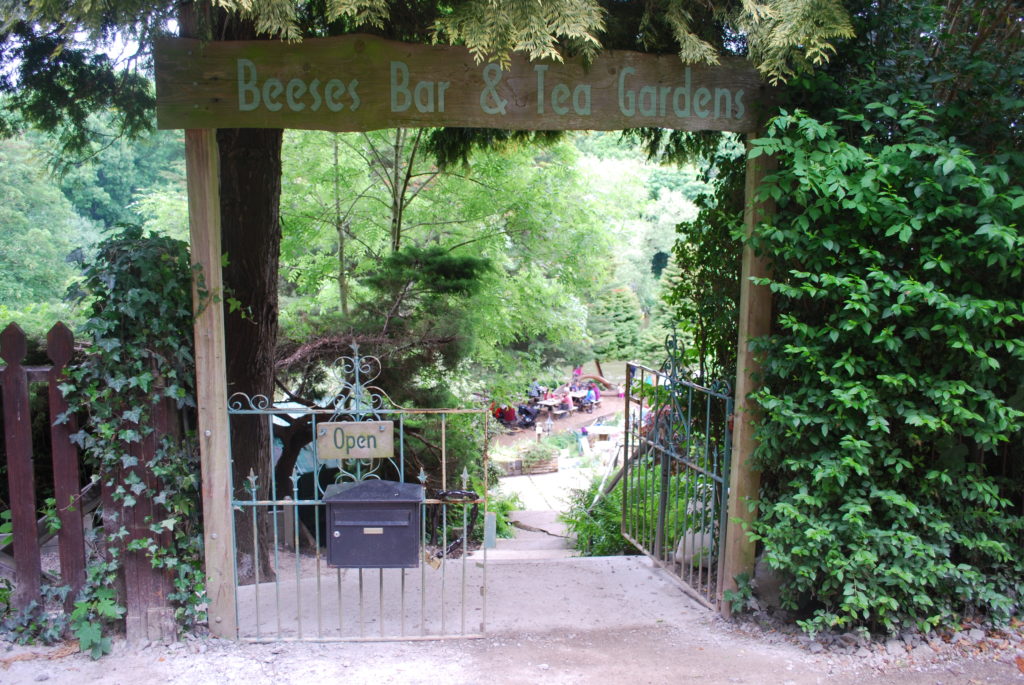 Set beside a beautiful wooded stretch of the River Avon, Beese’s Riverside Bar is an escape from the usual and where generations of city dwellers have taken refuge and put the cares of the city behind them, even if only for a few hours at a time.

Beese’s opens annually in Spring, and closes on the last full weekend in September. The last day of opening in 2018 will be Saturday 29th Sept.

We welcome families, host celebrations and excel in private functions such as wedding receptions, parties and corporate hospitality events.

Our large riverside decking area is great for smaller informal parties up to 50 people (mostly covered).

Cream teas are what put Beeses on the map over a hundred years ago and are still very much a big part of why so many people make the journey up river with one of the ferry companies.

We love our our Music Nights at Beese’s on Fridays. The music’s free and we can pick you up and take you back across the river in our ferry, or you can come with Bristol Ferry from the city centre, leaving at 6 pm. That’s a one way trip so you’ll need to make arrangements to get home by road!