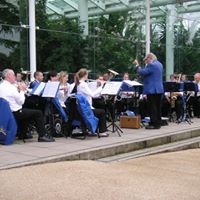 The Band, now styled on Military Band instrumentation, was originally founded by a small nucleus of 7 or 8 young musicians in February 1992, following the demise of the Evesham Sea Cadet Corps Band. The number of members achieving good results for examinations set by the Royal Schools of Music has resulted in the Band rapidly gaining recognition as a successful training ground for young musicians and aspiring adults within the Vale of Evesham.

Having also attracted support from a number of other experienced local instrumentalists, to supplement the backing and expertise of an excellent tuition staff, the Band has grown from strength to strength. The Band has a wide repertoire of popular music - featuring standards, songs from the shows, movie themes and many of today’s classics.

Smartly uniformed, the Band presents it’s members in colourful royal blue jackets, which show contrasting navy cuffs and lapels, trimmed with gold braid. This is complimented by black trousers and matching black tie bearing the Band’s own distinctive logo in gold; bringing a touch of splendour to every occasion.

Now popular throughout the Midlands, the Band has performed at many prestigious events such as providing conference music for LAUTRO and performing at the hospitality Open Day. ‘’Fly High with SONIX’’, appearances at Garden Parties, Carnivals, Fetes and Parades across the region and playing suitable programmes of music for Afternoon Concerts in Parks at various towns including Cheltenham, Gloucester, Kidderminster, Leamington Spa, Stroud, Stratford-Upon-Avon, Warwick and Worcester.