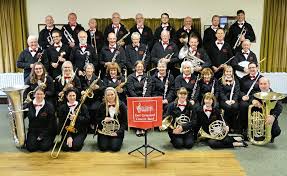 The Band was founded in 1974 from the original Town Band.

We are a friendly and active community based concert wind band attracting a diverse membership of all ages and experiences throughout East Grinstead area and beyond.

We are proud to represent the town of East Grinstead performing regularly throughout the South East at concert halls, bandstands, fetes and town squares. We are honoured to have agreement that the East Grinstead Town Mayor is our President, this person changing every year thus offering new ideas and support to our activities in the town.

​We also play under the banner of the Bluebell Railway Band, performing at Horsted Keynes and Sheffield Park Railway Stations including various special events such as the Seaside and Steam Weekends and the annual Carol Service.

The Band has on occasion been on tour abroad. In 2014, we played in Belgium, including performing at the Menin Gate Last Post Ceremony in Ypres, as well as concerts in the market squares of Ypres and Bruges. The Band has just returned from a trip to the Rhine Valley in Germany.