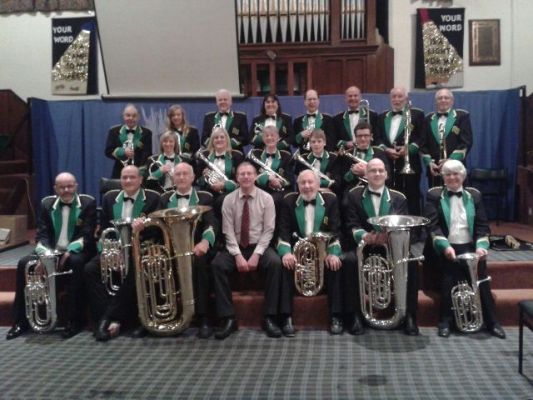 The Rushden mission band is a concert band that provides entertainment for a variety of functions.

The band also participate in raising money for nominated charities.

We rehearse on a Thursday evening at the
Rushden Mission Church at 7.30pm.

During the Christmas season of 1897, the Brass Band of the Rushden Salvation Army had a 'break'
with the local Corps.They were asked to relinquish their uniforms and instruments, which they did.
The ex-bandsmen were invited by the 'Tin Tabernacle' in Station Road to form a new band.Some
bandsman were able to purchase their own instruments with the remainder being funded by the church.
The band adopted its new church building as its headquarters and the
RUSHDEN INDEPENDENT WESLEYAN MISSION BAND was born in 1898.

From 1898 - 1931, the band played weekly, at Sunday open air services as well as at occasional concerts in the park. They then decided to compete in contests to show that 'a Christian musical combination could stand up to trained efforts of other brass bands.' They enjoyed success at contests over the the next few years. They also made regular radio broadcasts until the start of the second world war.

Sadly, several of the players were lost during the second world war. This left the band with a depleted membership for a number of years. This did not deter the stalwart members of the band, who continued to meet, until eventually the numbers grew again.

Some five and a half years ago the Band was left in a state of crisis when the Musical Director resigned and a number of players left with him (that is a common phenomena in the brass band world). The remaining band members stuck together and have rebuilt the Band. Banding is team game, and this is a determined team. They have purchased a number of ‘new to them’ instruments, using the policy of buying high quality second hand rather than new student level purchases and in order to present new material have especially concentrated on developing their percussion section, including the purchase of a new top of the range drum kit, xylophone and pair of timpani. This has been especially hard work as the Band cannot apply for lottery funding because of its links with the church.

There are now fourteen players in the Band who have joined in the last five and a half years, and the Band proudly includes eleven teenagers, four of whom have joined from the Band’s own Training Band. Over the past four years the Band has adopted a charity each year and in the three years previously had raised £7,000 for those it had supported. This year the charity is the Sensory room project for the children’s wards at Kettering General Hospital. The Band’s share of the proceeds from its CD ‘All the fun of…’are dedicated to this This busy Band is still a work in progress in terms of its development but currently manages to fulfil between fifteen and twenty engagements a year.

At present there are about 25 members in the band who meet regularly on a Thursday evening to rehearse at the Rushden Mission Church. The players range in age from 12 years to 70+ years. The present conductor has been with the band since 2014. We play a wide range of music and have a lot of fun in the process! Throughout the year, we perform concerts across the county. We also play at summer fetes and garden parties, and also at a number of church services each year. We play purely for pleasure and do not take part in contests.