Based in the London Borough of Bexley, Belvedere Concert Band has gained a reputation as one of the leading concert bands in the South-East, attracting both experienced and aspiring musicians from the surrounding areas.

The Band performs a wide repertoire of music, ranging from light classical and traditional music, to music from stage and screen, 'big band' and popular standards. Dependent on the nature of the concert, the Band can engage supporting vocalists, or join forces with a full choir. For most concerts the Band will use its full complement of around 45 musicians, but for certain special occasions, a smaller band may be provided. 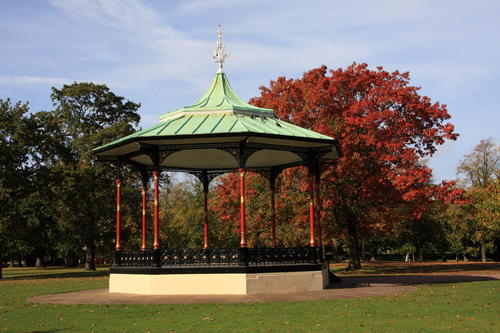 Hexagonal bandstand surrounded by lawns and trees, with concerts for an audience in deckchairs.

Overlooking the River Thames and home to one of London’s most iconic views, Greenwich Park is an amazing mix of 17th century landscape, stunning gardens and a rich history that dates back to Roman times.

The Bandstand was erected in 1891, the same year as the park's only surviving Victorian granite drinking fountain, this Grade II listed structure is located on the south-east side of Great Cross Avenue. The field surrounding it is known as Bandstand Field.

This bandstand is used today as a traditional meeting point for leisure activities and sponsored events.