Stems were formed in the UK in 2011 by founder member and composer John Dorr, with the idea of mixing classical composition and instruments with rock. The music is often described as 'Cinematic' and sometimes labelled Post- Rock or Neo- Classical. In 2018 the band relocated to Nuremberg.

Since 2013 they have toured Europe several times and developed a following based on their reputation for intense and beautiful concerts, often performing with local string players to expand the sound. Performing shows with Russian Circles, Tides from Nebula, Pelican, My Baby, Lovely Eggs.

The band has received commissions from British Film Institute to create new live soundtracks for the silent films of Georges Méliés. Which has been performed in many Cinema's and events such as a short tour with British based DJ Yoda, including a performance to an audience of 8000 in their home town, November 2014. They have also released music with Fluttery Records (Istanbul) and Come Play With Me records (Leeds, UK) 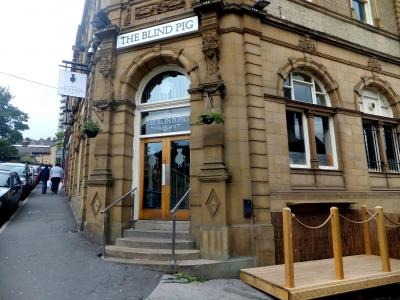 The Blind Pig in Sowerby Bridge is an eclectic Live Music venue and speakeasy style bar. We are well known for our Live Music, our DJ's and our Cocktail Teapots!
But it wouldn't be fair to our team if we didn't put them pride of place on here. They'll pour you a good pint and see to it you enjoy your time here at The Blind Pig!
Our upstairs function room comes complete with Bar, built in PA system and a Sound Engineer for bands. Our DJ's use Original Vinyl and have a long history of getting people dancing. We're even an Art Gallery, exhibiting many works from talented local artists.