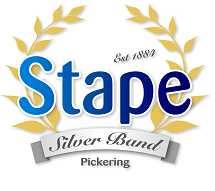 A Friendly brass band in Pickering. The band has been in operation since 1881 and are keen to maintain the organisation in the local area.

Stape Silver Band was established in 1884 in Newtondale, when William Pierson & John Hugill along with some enthusiastic friends travelled to Leeds to purchase instruments. The local farming community, which is close to the edge of the North York Moors took the band to it's heart with most families being represented among the membership. Thomas Pierson, the founder's son, played Soprano Cornet for 70 years, starting at a very early age. William Watson & John Nicolls also had very impressive records serving the band for many many years. The 3 families still had descendants playing well into the 1980's.

Practices were held in various locations around the village of Stape, including the old chapel & in a house situated almost opposite, as well as in the Village Hall. In 1962 the band moved to the town of Pickering from where it operates from today. On first moving they rehearsed in a small room in W.J. Robinson's Egg Packing Station. It was cold & draughty for many years until in 1979 it was made more comfortable.
In 1989 the band completed its own purpose built bandroom, situated in Outgang Lane, Pickering, which was funded 50% by the band & the remainder given by Ryedale District Council. Elizabeth Shields the Ryedale District Council Chairman opened the building in 1990 after a short concert by the band during which grateful thanks were expressed to Mr. W.J.Robinson for his generosity in providing a rent-free home for almost 30 years. Now with a permanent home it was possible to store more instruments & equipment & look to the future.

For many years the only uniform worn was a flat cap, but the photograph below with the band in uniform was taken in 1935. Around 1960 a new uniform was decided upon & everyone was equipped with a black double-breasted jacket with blue collar & cuffs & black trousers (& skirts) with blue stripes, both with yellow piping. There was also a black peaked military-style cap with a blue band & piping, & a black bow tie, worn along with a white shirt. After renewing the uniforms in the same style with a more modern material some years later, it was decided in 1980 to have a completely different look. The black trousers remained, without the stripes, but the jacket was blue in colour. Worn without the old-fashioned style hat, a dark blue velvet bow tie finished off the uniform. In 1997 another refit saw almost a return to the 1960's uniform. This time the jackets were 'lion-tamer' style with light blue collars & cuffs with gold piping on the back as well. Navy blue was the colour choice for the jacket & trousers with matching navy bow. In 2006 for its appearance at the National Finals in Dundee, a navy 'walking-out' jacket was worn with a light blue tie. As the cost of one playing uniform now exceeds the cost of 20 uniforms in the 60's in 2014 the band chose to buy some light blue shirts worn open neck style & a waterproof fleece for those wet & cold days, keeping the playing jackets for special occasions. 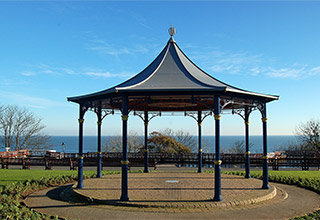 Filey has lovely gardens behind the promenade with a bandstand where you can enjoy brass band concerts on Sunday afternoons throughout the summer season.

If the weather is bad any concerts will be re-located to St. John's Church on West Avenue.