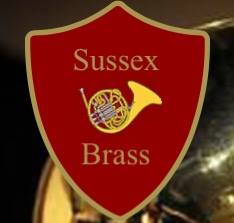 Brass instruments are traditionally associated with ceremony because they give that unique thrilling sound that adds sparkle and excitement to every grand occasion or major event, from weddings and private parties to fetes and opening ceremonies.

Formed in 1968 the band has its origins and roots in Pevensey Silver Band, Hastings and St Leonard's Band, Wellington Square Boys Band and, others.

The Band is a traditional format Brass Band comprising Bb Cornets in three sections with two soloists, an Eb Soprano Cornet, Bb Flugelhorn, Eb Tenor Horns, Bb Baritones, Bb Euphoniums, Trombones and Bass Trombones and an array of Tubas (or Basses) in Eb and in double Bbb. Behind this there is a battery of drums and percussion of every imaginable kind.

The repertoire ranges from traditional "brass band music", spirited marches and the like, through jazz, swing, rock and pop, as well as contemporary works composed and arranged by the band's musical director and others. There is truly something for everyone.