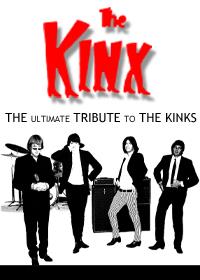 The best of the Kinks performed by the excellent Kinx. Featuring 'You Really Got Me', 'Waterloo Sunset', 'Tired Of Waiting' and many more.

It’s difficult to believe but within a year of their first unadvertised gig, The Kinx had headlined theatres, supported original 60’s bands (The Fortunes, Gerry & The Pacemakers & The Move), performed on the main stages of Britain’s top tribute festivals …… and secured a recording contract.

With three albums to their name & endorsement from non other than Dave Davies himself, The Kinx quickly established themselves as England’s premier Kinks tribute act. Now, almost 10 years into their career, they can also boast having their music included in major international film releases and performing as joint headliners with such diverse original artists as Chris Farlowe, Steve Ellis, Secret Affair, The Foundations, Marmalade, Marty Wilde, The Swinging Blue Jeans, Mike D’Abo & The Merseybeats.