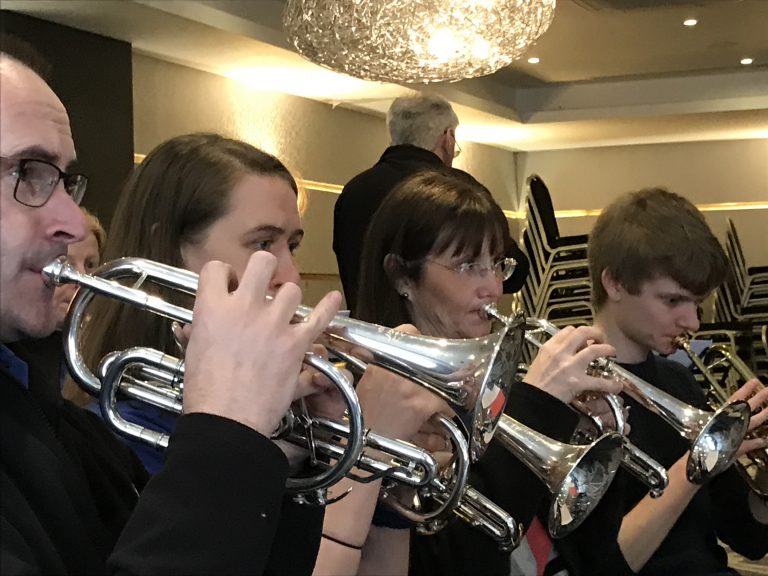 Milton Keynes Brass (MK Brass) is acknowledged as one of the southern region’s most active and popular bands.

The band maintains a busy contest and engagement schedule which includes regular bandstand performances at both regional and local venues, and seeks to work with its community in the Milton Keynes area by supporting organisations like Willen Hospice and the British Legion.

Originally known as Broseley Brass the band, was formed with just eight players in 1984 through the generous sponsorship of a building company called Broseley Homes Ltd. Broseley Homes Ltd was involved in the early development of Milton Keynes – the city in which the band is based. The sponsorship deal lapsed many years ago, but having developed its identity locally the band retained the “Broseley” name until 2009, when the band was re-named “Milton Keynes Brass”.

Under the leadership of the band’s first professional conductor Malcolm Holloway, and then subsequently and significantly under Paul Fensom, the band rose through band competitions from the Fourth to the Championship Section. MK Brass now (2019) competes in the First Section, having been recently promoted from the Second Section under the band’s current M.D. Jonathan Mott, and is actively seeking promotion to the top flight again.

Since Jonathan’s appointment the band has enjoyed significant success on the contest stage taking prizes at Area Qualifiers, Leicester, Wychavon & Butlins Contest in both 2017 and 2018, and a creditable 6th-place at the National Finals.

The band has also undertaken overseas tours in Germany and Switzerland, and recorded its first CD – “Broseley Bandstand”, and has take part in the Tring Arts Festival production of the stage play “Brassed Off”, which proved to be a great success.

The band regularly provide music for a range of events from themed fundraising concerts through to weddings and garden parties, traditional bandstand concerts and corporate events, church services and “Bierkeller” evenings.