The Horse and Farrier 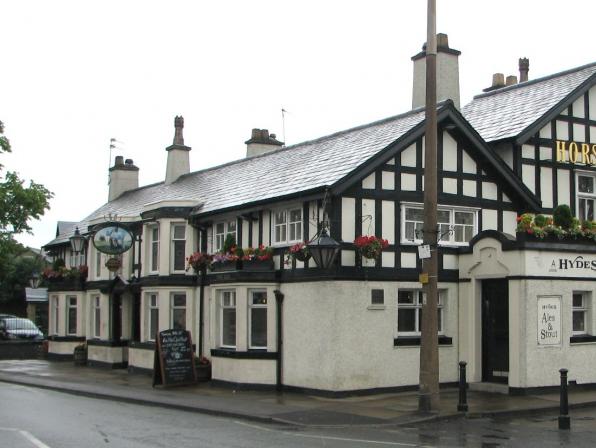 An impressive building with several bay windows, probably formed by joining together three large cottages with the elevations later rendered to look like stone; it has a mock Tudor upper floor.

Dating from before 1910, it forms a focal point in the village being at a prominent junction, and opposite the Clock that was originally the World War I memorial but replaced by a new memorial at the other end of Gatley Green.

A lovely covered entrance with good mosaic, leads to a multi-roomed traditional pub with food service.

It is far bigger than it first appears - in total there are six separate rooms.

A central bar serves all the rooms, with the small Martingale Room available upstairs for functions.

A quiet room with real fire and a very traditional air to it is set to the right of the entrance, and there’s a couple of seats set cosily under the stairs.

To the right of the bar is an open lounge with TV and behind that a stand-up drinkers area with dartboard (no children permitted in this part).

To the left of the entrance, you first encounter a wonderful little snug, almost akin to a railway carriage compartment, again with real fire.

Beyond that are two well-appointed lounges for people who enjoy a quieter drink; these too have fires.

A wide choice of food is available from snacks to steaks with the house specials all available from the kitchen towards the rear. Vegetarian meals are also provided.

Refurbished in early 2016, this excellent pub is popular with all ages; children are welcome until 8pm if accompanied by a responsible adult.

The real cider varies from a choice of five. Beer festivals happen from time to time, and are accommodated in the yard outside to the left of the building, usually coinciding with Bank Holiday weekends.

Le Funk will be appearing as a 4 piece band.