The current band has recently started contesting again and in March 2013 became the North West 3rd Section Regional Champions. We then competed at the National finals in Cheltenham in September 2103. The band has now been promoted to the second section at national level and again competed in the North West Regional contest in March 2014, attaining a very creditable 2nd placement. The band is again taking part at the National finals, this time as a 2nd section band. We also compete in the Whit Friday March Contest which means dashing around the small Saddleworth and Tameside villages in a 50 seater coach to compete at around 8 or 9 events. 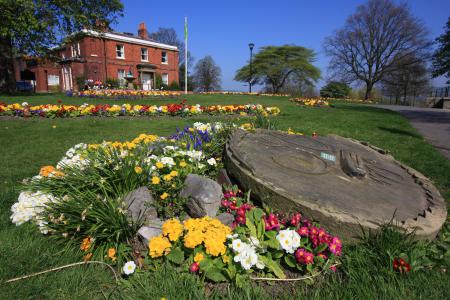 Not technically a Bandstand as there is no actual stand, however it is host to a number of concerts.

Marple Memorial Park was built on land donated by local families. It opened in 1922 to commemorate all the Marple soldiers who died during World War 1.

Today, it is at the heart of the local community, housing the library, health centre and other public buildings. The park provides a wide range of outdoor leisure facilities for all ages. These include a new skatepark, play areas, multi-use games areas and teen seating. The park is a good starting point for local walks or for exploring local history. On a clear day there are stunning views of the Peak District hills. Other attractions include a bowling green, French boules court, tree sculptures, sensory gardens and many heritage features.

Limited mobility access: most parts of the park are wheelchair accessible on tarmac paths.

The Marple Band and Hawk Green Band combine for a Sunday afternoon concert in Marple Memorial Park. A wide variety of entertaining music, features and solos.