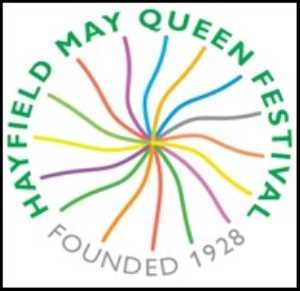 A traditional Village May Queen Parade & Festival, which has been going since 1928, for all the family not to be missed.
Great Bands, Entertainers, Majorettes, visiting royalty, stilt walkers etc along with our new royal family

Once you have watched the colourful and musical parade along the village streets walk on down to the Old School Field which is just off Swallow House Lane and enjoy a spectacular afternoon of arena events, entertainment

We also have Cubbins Fun Fair with us providing us with all our favourite attractions, open from Thursday to Sunday 🎡🍔🌭🍭🍩

Entry is via donation, this then goes towards parade costs

Food & refreshments are available along with loads of stalls and fun & games.

Parking is restricted so if possible please park in New Mills & use the 61 High Peak Buses from New Mills to Hayfield (5 minutes) or the 358 Stagecoach Stockport to Hayfield.

FREE ENTRY BUT A DONATION ON ARRIVAL GRATEFULLY RECEIVED.

Hayfield May Queen Food and Music Festival on the Sunday at the Old School Field, featuring local food stalls, local bands and a licensed bar, as well as the Fun Fair 🎡 this event is again entry via a donation

Bands this year are