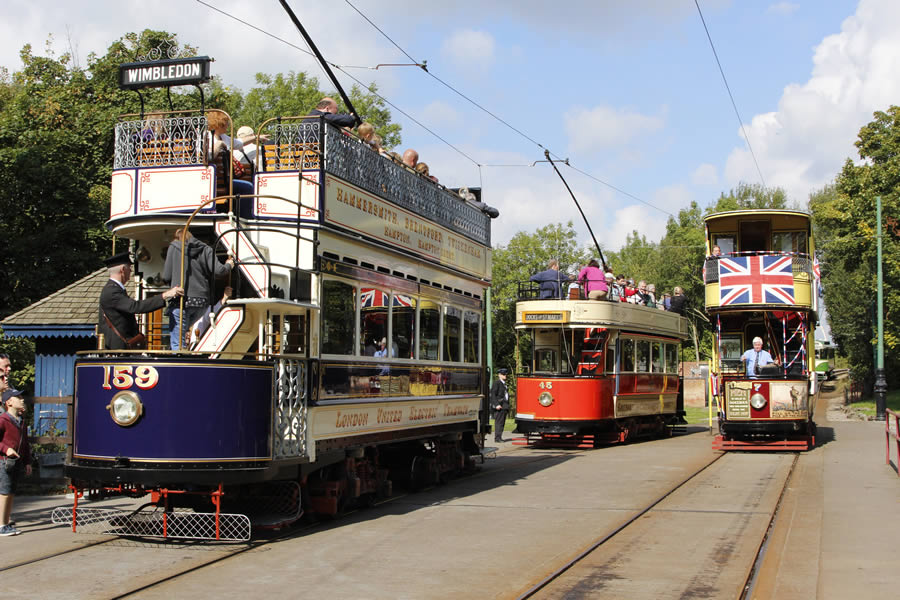 On arrival collect your old penny to pay the conductor your tram fare, and receive a ticket you can use all day. Trams depart regularly from town end, calling at various stops along the mile long track.

In 2010 the Great Exhibition Hall was redisplayed with the ‘Century of Trams’ exhibition. The exhibition takes you on a fascinating journey through a hundred years of tramway development, from 1860 – 1960, taking in horse trams, steam trams and electric trams.

Step back in time along our recreated period street where you won’t have to wait long for the rumble of a vintage tram. Many of the buildings along the street have been rescued from towns and cities across the UK, such as the Derby Assembly Rooms façade which came to Crich after a tragic fire. The Red Lion Pub and Restaurant came all the way from Stoke and was re-built brick by brick. Also look out for the street furniture which is dotted along the street, including the Bundy Clock at Town End Terminus and The Exhibition Hall windows which were rescued from the Doncaster tram depot.

Located in the heart of the period street, Rita’s Tea Rooms are the perfect place to take a breather and relax. Serving hot meals from 12pm – 3.00pm, sandwiches, a range of pies and mouth-watering cakes everyday. Vegetarian and gluten free options are available.

Welcoming families and even dogs, the Red Lion pub opens daily serving a selection of cask ales, local bottled beer, cider and wine and soft drinks, plus hot drinks, panninis and cake. With plentiful outdoor seating, it is the perfect venue to enjoy the period street and do a touch of tram spotting.

Funded by the Countryside Agency, the Woodland Walk & Sculpture Trail allows visitors to stretch their legs on a trail that winds its way through native woodland now dotted with sculptures by our resident sculptor. You may see him at work in his outdoor studio.

With breathtaking views across the Derwent Valley and Derbyshire Countryside the Woodland Walk is the perfect place to escape for a picnic or to while away the hours surrounded by nature. Look out for the sculptures which lurk around every corner such as the Giant Wood Ant and the Green Man.

Children can let off steam in the Discovery Depot – a huge indoor play area with a soft ‘tram’ climbing frame and ball pit and separate soft play area suitable for toddlers. Plenty of chairs are available for parents to have a break and lots of room for pushchairs.

There is a children’s outdoor play area near to the Woodland Walk and Sculpture Trail. It includes a Mordred castle, swings, see-saw, twister, zip wire and pick- up sticks.

Dogs on a lead are accepted, provided that owners clean up after them. They are not permitted in Rita’s Tearooms or the indoor children’s play area, but can go everywhere else, including on the floor of the lower decks of trams if well behaved.

We provide a shelter at Town End for buggies and pushchairs to be left, while you ride the trams.

*Free return admission on full price tickets only (including Adult, Senior, Child and Family tickets). Does not apply on re-entry to 1940’s / World War II events and refers to the 12 month period from when you purchase your full priced ticket and available during our opening dates only.

This performance will be on the Bandstand.