Join us for the Paradiddles Music quiz!
If you are feeling brave and hungry then make sure you get tickets as there is free pizza
(and for the competitive people out there, cash prizes for best team!)

We love a good quiz here at Paradiddles. The music category in any quiz is always our favourite so we thought lets make the whole thing music themed...

Phil Maguire- Influenced by the traditional folk songs with an inspiration for his music taken from storytelling and drinking songs. Phil Maguire will bring along a mixture of intimate, relaxed folk dreams and blues foot-stompers to Paradiddles music venue

Garrington T Jones- An accomplished instrumentalist, vocalist & harmonica player, from country music via steel and slide guitars, harmonica and a distinct vocal sound, his ?modern-time? blues range from drive-time to foot-tapping sound that brings great energy to each performance

Tor- Tor is a local folk phenomenon, with intricate instrumentat...

The Speedgums are a high energy and soulful three-piece band from hay on Wye consisting of double bass, banjo, ukulele, trumpet, flute, harmonica and kazoo. They play mostly Americana and old-time songs from the 20s and 30s, country, blues and jazz. 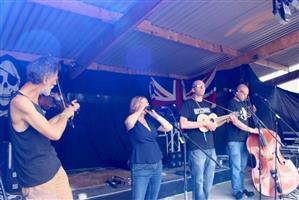 John Jenkins- Fretsore Records recording artist John Jenkins is carving out a path for himself as a renowned singer/songwriter on the UK folk, country, and Americana scene.
"Here we have a collection of warm, emphatic, personal and resonant songs which are akin to having a deep conversation with an old friend, someone with whom you feel comfortabl...

The Arboretum ? A sonic wall of sound, featuring loud guitars, deep grimy bass lines, industrial electronic rhythms, all layered over a hard hitting rock-dance groove. The Arboretum continue to explore the narrative in their music by developing its lyrical layers that build on themes of hope in these uncertain, dark and challenging times.

Pave The Jungle: The band?s debut EP ? The Hissing ? is a tour de force of post-punk alt. rock intensity flavoured with intellect and wit. Produced with the support of Chris McManus at Blank Studios, The Hissing somehow manages to capture the sound and the spirit of their live show, complete with thunderous breakdowns and back-of-the-throat vocals....

An Evening Of All Female Stand Up Comedy

Boz Live At Paradiddles With Support From Tor Pingree

Kick The Cancer With Kick The Clown + The Lightweights