Licensed Bar
Films: Open for an hour before the film starts, closed thereafter

Phantastes inhabits an ethereal realm and explores the parallels of the seminal C19th fantasy novel of
the same name by George MacDonald and the beginnings of Nick's own love story from 1982.

At that point the band had an idea that people would like to celebrate the classic music of the 80?s, a decade that brought us new romantics, two-tone, electronica and big hair rock (amongst others).
Little did they realize that this 80?s p...

The Total Who Show

his show plays all the hits from The Who?s early years: Tommy, Live at Leeds, Quadrophenia and many more. Come along and celebrate with us and just have a great night reliving these amazing songs.

The show is not just an imitation but one of the greatest exponents of the music that defines their generation.

Widely regarded now as the UK's most authentic and leading tribute to The Jam, The Jam?d are totally committed to giving an unforgettable, authentic performance with all the energy, passion and style of the Woking 3.

As full time touring professional musicians, and massive Jam fans, the band don't "try to be" or "pretend to be" The Jam, but rather... 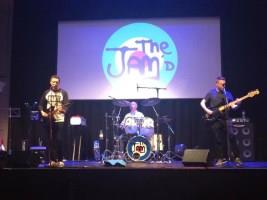 BOOTLEG BLONDIE are the official Debbie Harry and Blondie tribute band and have played the world famous CBGB club in New York City, the Isle of Wight Festival, London?s 100 Club and the legendary Hammersmith Palais and appear regularly at many top venues and festivals around the UK and Europe. Lead singer Debbie Harris (as seen on BBC1) says her pr...

2 hour show celebrating the 50th anniversary of "Close to the Edge".
* No intermission

Roger Dean will introduce the band and have a Q and A around 6.30.

DEBORAH BONHAM is regarded as one of the finest blues, rock and soul sing...

Oh What A Night ? The New Jersey Boys

New Years Eve Back To The 80s With Riviera Dogs!

Cbeebies - The Night Before Christmas

Cbeebies - The Night Before Christmas

Simon & Garfunkel Through The Years

Rising From The Deep

The Sound Of Joy Division

The Uk Monsters Of Rock Show

Transmission The Sound Of Joy Division

Manoeuvres - A Tribute To Omd (orchestral Manoeuvres In The Dark)

Bruno - A Tribute To Bruno Mars

Man Machine (a Tribute To Kraftwerk)

Back To The 80s With Riviera Dogs

Nil Rogers & Chic - A Tribute To

Rising From The Deep

Stray With Co Headliners The Groundhogs.

Back To The 80s With Riviera Dogs

Land Of The Giants

Go Now - The Music Of The Moody Blues

Bruno - A Tribute To Bruno Mars