Independent live music venue in south London. The 3rd best venue in all of London according to TIME OUT readers. Home of Roof Dog.

We didn’t set out to be a venue as such but live music at the Windmill Brixton, just kinda evolved. Late night sessions at this bar revealed that the regulars carried a wealth of experience in musicianship, sound engineering and promoting, and since we drank there anyway we decided that we should get a good band down now and again to listen to.

The bands came. They loved the informality and the fact that we bothered to pay them, and, some five years later the Windmill is known far beyond the backstreet in Brixton where it’s situated.

Although we’re just a little backstreet place, Windmill Brixton has gotten a glowing “Ace Place” review in Time Out, was called “your new favourite venue” by Drownedinsound.com and has been name-checked over the airwaves by the likes of XFM’s John Kennedy and Radios 1’s Steve Lamacq. Gigs have been reviewed in NME, Kerrang! and other mags and The Independent newspaper named us one of the TOP TEN VENUES IN THE UK (the only other London venues to make the cut were Brixton Academy and Cargo).

We feel we get these accolades for a number of reasons. Entry is cheap. Beer at pub prices. There’s a nice candlelit atmosphere, friendly staff and (less friendly) dogs on the roof. But most important of all is the quality of music – it’s no good telling us that you’ll ran the place with your mates; if your music sucks we aren’t interested.

We book and cheerlead bands we like and many have played several times.

Well that’s more or less the history, cos we’re more concerned about the great bands that will be playing in the future.

It's not the destination, it's the journey. Not many artists stay relevant to their fan-base over a sustained period of time, but Californian singer-songwriter, Jeff Caudill, is one such rarity. Shooting to prominence with punk-pop band, Gameface, in the early 1990s, his irrepressible knack for a memorable hook and melody quickly established a dedi... 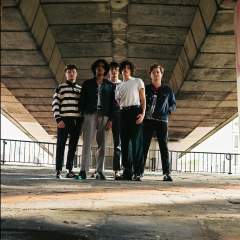 Korea's Drinking Boys and Girl Choir bonded over a shared love of drinking, skating and punk inspired by 90s/00s hardcore punk/indie-rock scene in their home city of Daegu.

They they DIY-produced their 18 track debut album Keep Drinking released on Damnably/Electric Muse in 2019, followed by ...

Cosmic Carnage is proud to present: SMASH IT OUT VII Summer all dayer W/:

Bruxa Maria
Vicious. Been lucky to hear their new album out soon on Hominid Sounds. It made me hide in my chimney for 8 weeks.

For The Benefit Of Mister Quy

Season of the Riff Fest

Mr Ben and the Bens