We don't have any details about this venue, it is on our list for researching, but for now we only have details of events taking place.
Please double check venue information on any ticket sellers sites before purchasing.

Celebrating The Shindig! Centenary - With The Hare And Hoofe

The highly touted crazed progressive act The Hare And Hoofe will take to the stage at 10PM to celebrate 100 issues of Shindig! Magazine... the latest!, while Jon 'Mojo' Mills, Paul Osborne and Alasdair C Mitchelll will spin an array of heavy-psych, funky-prog and bubble-rock through to the early hours.

ROVAR17 vs. XPLDNGLKE
A collaboration between two prolific Hungarian sound artists, playing as part of their UK tour. The industrial noise warlock Rovar17 and the rhythmic hermit XPLDNGLKE. Together the duo creates soundscapes that exists somewhere between catatonic phantom noises and stimul...

In this illustrated talk Patricia MacCormack will introduce the varied manifestations of lesbian vampires in '70s euro horror including the films of Franco, Larraz, Borowczyk, Grau and with special emphasis on the work of Jean Rollin, with whom the speaker was close friends until his de...


Glaswegian psychedelic heavyweights Helicon
have just released their second album, the aptly- titled 'This Can Only Lead to
Chaos.' on January 24th via Fuzz Club, it follows on from their 2017
self-titled debut and a recent three-track 'Zero Fucks' EP, released earlier
this year. A 9-track effort, it sees...

We welcome back counterculture icon Mohammed Abdullah John Alder aka TWINK for a special evening of music, talk and film

He'll introduce a rare screening of the psychedelic 60's b-movie What's Good For The Goose, starring Norman Wisdom and featuring Twink with the Pretty Things, followed by a questions and answers session moderated by Merlyn Rober... 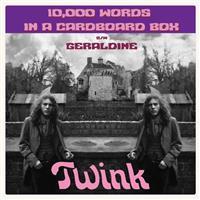 At The Centre Of The Universe Festival

AT THE CENTRE OF THE UNIVERSE FESTIVAL

Necrophilia - The Love That Transcends Death