Thank you to the RTÉ Radio 1 Folk Awards. I am over the moon to have received an award for Rock the Machine. Thank you to all who helped me get the song to this point. The Dublin Dockers, National Concert Hall, Dublin Port Company Starboard Home project, Mossy Nolan, Mic Geraghty, Christoph Capewell, David Odlum, Jamie Goldrick, River Lea and Myle...

- SUNDAY TIMES COLOR SUPPLEMENT
"Not only is Kent know as a well known master of the blues, his guitar playing is exceptional and his deep intriguing voice a great combination that really set the old style delta blues alight. DuChaine really has lived the blues life which is clearly evident in his music.
- THE ORCADIAN, ORKNEY BLUES FESTIVAL
Kent... 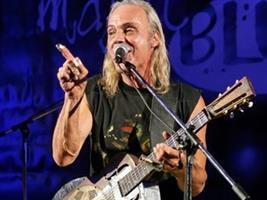 Debbie Harris and Bootleg Blondie can be seen at all the major venues and festivals around the UK, Europe and worldwide having played the Isle Of Wight Festival, the Shepherds Bush Empire, the 100 Club, the Hammersmith Palais and the Electric Ballroom in London, Eric's in Liverpool, 80s Throwback Floating Festival and have played with amongst other...

Champions of the Socially awkward! 2 men, drums, bass, noise, peace, love and all the other stuff. Ben Goddard & Dave Sheppard - providing the backdrop to your next great night when your out-out.

New Album Thistle & Thorn
John is preparing for the release of his fourth solo studio album in as many years.
Entitled Thistle & Thorn it was recorded between Clonakilty, Co. Cork and Louisville, Kentucky during the early part of 2018. It features numerous collaborations with longtime musical partners Brian Casey and Davie Ryan as well as ...

They're back at The Greystones! Café del Mundo are presenting their new album "Famous Tracks", recorded @Abbey Rd Studios.

Tens of thousands of concert visitors per year, standing ovations, and a fan cult on the level of a rock star's this is Café del Mundo, Germany's hottest acoustic guitar export.

The trio started out following their first Transatlantic Sessions together in 2007 a project all three continue to be involved in. When you are as busy as these three 'top of their game' musicians, you find time when and where you can. Mike McGoldrick said that just a few days before they recorded the album he and John Doyle went out to eat to hav...

An Evening With Romeo Stodart Of The Magic Numbers

Blue Orchids - Live At The Greystones

Maz O'connor Live At The Greystones

The Outside Track's Live At The Greystones

Ian Dury And The Blackheads

King Pleasure & The Biscuit Boys Live At The Greystones

Aynsley Lister - Live At The Greystones

We Are Not Devo Live At The Greystones

Sam Kelly And The Lost Boys - Live At The Greystones.

Grainne Duffy Live At The Greystones

Stray - Live At The Greystones

Sinnerboy A Tribute To Rory Gallagher

Steve Fletcher And The Angels Of Mercy- Live At The Greystones

Katy Hurt - 'the Revved Up' Tour

Catfish Keith Live At The Greystones

Otway And The Big Band

What You Do With What You've Got - Ray Hearne

The Fargo Railroad Co. And Friends For Music Against Cancer

Straighten Out Are The Premier Stranglers Tribute Band

Once And Future Band