We're a live music venue that puts on punk and indie bands and various club nights.

This event has been postponed.

Over the course of two albums (2016?s ?I?m Not Well? and 2018?s ?Reidi?), Black Foxxes main-man Mark Holley established his band as a potent creative force, carving out a signature spot on the emotive rock ?n? roll map backed by strong, growing support from fans and media alike.

OUR HOLLOW, OUR HOME have announced a European tour!

Set to take place in September and November 2021, the tour will see the Southampton-based metalcore band touring across the UK and mainland Europe. Support for the Cavern show comes from THECITYISOURS, FOR I AM KING and CHUGGABOOM.

Speaking about the tour, the band says, ?we are absolutely ecst...

Born after Britpop, brought up on hip hop, with members from Peterborough, Birmingham and Chicago, Airways have been compared to Arctic Monkeys, Blur and Mac De Marco, but see themselves as part of an international, genre-fluid wave of bands that can go anywhere.

Just back from a European tour in su...

Luminescent is proud to present two new shows to the South West UK with one of our favourite bands THE WAVE PICTURES!
Twenty years after forming in Wymeswold, Leicestershire as teenagers, The Wave Pictures have gone on to be one of the UK?s most prolific and beloved bands. Fond of classic rock, jazz and blues, they are also one of the most accompli... 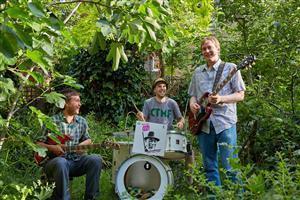 Feelin' This - A Pop-Punk Party

Altern8 + Hybridize + Kill All The Gentlemen

Indie Club - First One Back!

Off With Their Heads (us Punk) + Guests

The Otherness + The Issues

Kill All The Gentlemen + Incursion

We Never Learned To Live + All Living Fear

Indie Club - After Haunt The Woods

Petrocks Fundraiser With Susannah & The Noise

Joe Gideon (with Jim Sclavunos From The Bad Seeds)

Wreckage 15 - The Best In Punk Rock

Dirty Hit Tour With Beabadoobee, No Rome And Oscar Lang

Beyou - A Nightmare On Gandy St

Hold It Down - Sister Sound

Griever + In Fear They Follow + Hybridize + Death By Ki