Jasta 11:the Event That Never Happened

Help us through the Covid-19 crisis by buying tickets for #TheEventThatNeverHappened - an event that, you guessed it, will never happen!

Buy as many tickets as you like at the prices below and your donation will be helping the technical staff that work at our gigs at The Star in Guildford survive this difficult period. All are self employed and cu...

World renowned maverick bluesman Son of Dave has had his music on the soundtrack of US TV series Breaking Bad, & appeared on Later with Jools Holland

Characterised by their signature wall of sound guitars, Kiran Roy's soaring vocals and driving, urgent drums, October Drift have gained a reputation for delivering blistering, high-energy live shows. Indeed, their first tour sold out before even releasing their first single, such is the buzz around their live performances.

With appearances at fes...

October 2021, the good ship Old Sea Legs comes sliding out into open waters for the first time. There are times to be had and rooms to fill with songs. Looking forward to seeing you along the way.

Crawling with vivid imagery and colourful characters, a timeless tangle of tongue-twisting, brain-burrowing lyrics that can swing from a breathless barr...

Having exploded onto the scene in 2017, Salvation Jayne have carved themselves a reputation for their white-hot, hook-laden explosive fuzzy riffs and glossy dream pop undertones.

The bands single 'Cortez' received support from the likes of BBC Introducing, Kerrang Radio, Amazing Radio and dozens more stations in the UK.

Support slots have include... 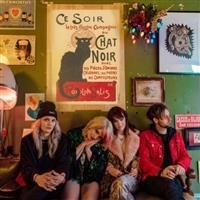 Blending sounds from alternative, prog, folk and pop and channelling influences from the likes of Pink Floyd, Muse, Fleet Foxes and Jeff Buckley, Cornwall's Haunt The Woods have crafted a distinctive sound, glistening with ambient swells and underpinned by expressive rhythms and masterly songwriting.

Having gained a reputation as one of the South ...

Instigate Presents: Lest We Forget

The True Deceivers & The Nefarious Picaroons

Leafy Incliine 9 - Slug13, This Is Wreckage, Treasure Of Woe, Princess