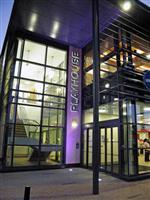 This 'state of the art' £8.5m refurbished venue is the flagship of a major re-generation project, breathing new life into this famous coastal resort. The venue boasts 638 luxury auditorium seats, a 10 seater corporate viewing suite and a contemporary look and feel to its bars and lounge area, which also features a superb sea view.