A 2nd Section Brass Band based in Stockport (NW England), we rehearse on Thursday Evenings from 19:45 - 21:45.
Musical Director: Nigel Beasley

Hazel Grove Brass Band was originally formed in 1850 and for 100 years was an active part of village life, playing at all the anniversaries during the reign of Queen Victoria. A tradition was established, with the band playing every Christmas Day at the local Liberal Club for over 100 years.

Over the years the Band played at an enormous variety of venues and events. Notably, the band represented the same Sunday School in Ashton-under-Lyne at 50 consecutive Whit Friday Marches.

In 1950 the old band folded. The closure of a local factory which employed many of the players and also housed the rehearsal venue caused problems which the band was unable to survive.

The old drum seen in the picture below (see website - History) turned up recently in a local Stockport school – somewhat in need of repair, but still more or less in one piece!

Happily in 1992 the Band was re-formed by an enthusiastic mixture of players from Poynton Youth Brass Band and plus some more experienced local bandsmen. Music, stands and instruments were all borrowed and rehearsals started in Hazel Grove Civic Hall; the Band’s headquarters for 11 years. In June 2003, the Band relocated to Davenport Methodist Church and then finally came back to the Hazel Grove Civic Hall, which remains it’s home today.

The Band has made steady progress fulfilling a wide variety of engagements from traditional brass band concerts to Bavarian evenings with an Oompah Band – we will try anything!

On the contest scene the Band has had many successes, winning six consecutive first prizes during 1997 and 1998. Our hard work and dedication was rewarded in 1998 when we won the Regional qualifying contest at Blackpool to represent the North West at the National Finals in Harrogate, a success which we have recently repeated in 2010. This year’s Regional win is one of 4 consecutive contest wins along with a win at Pontins Brass Band Championship and Buxton Contest, a title that was regained following success there in 2009.

In September 2010, after qualifying for the National Finals by winning the North West Regional Contest in Blackpool, the band’s hard work and commitment was rewarded when they were crowned 4th Section National Champions of Great Britain at the National Finals at Harrogate International Centre. 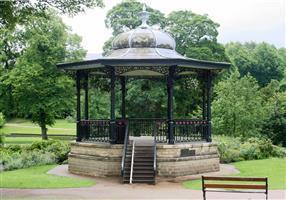