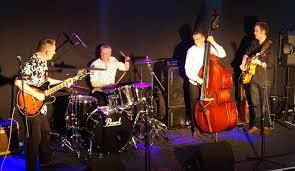 The Half Hand Hoodoo Blues Band are a four-piece based in York. Formed in 1995 by singer/guitarist frontman Dave Smith, the band has become well known on the North of England blues circuit with a number of residences in the City of York as well as numerous appearances at the Colne and Burnley blues festivals.

The band play a mix of different blues styles from the slide of Muddy Waters “Louisiana Blues” to the swing of Eddie “Cleanhead” Vincent “Kidney Stew Blues”. A typical set often closes with a one-chord North Mississippi Blues instrumental in open G. Audience response to this tune proves that simpler can often be better!

Above all, Half Hand Hoodoo believe that blues music should be played with fire and passion: you have to give more than 100% to do it justice.